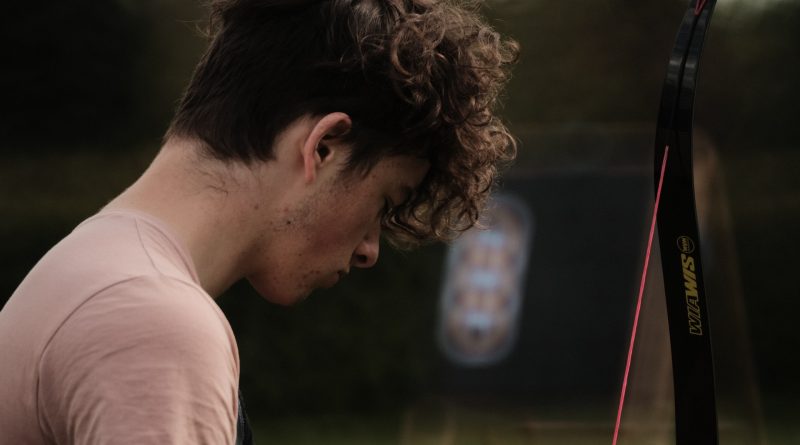 The sport of archery is relatively safe, although the bow is rightfully classed as a lethal weapon and was the means by which ancient man gained physical superiority over the animal kingdom. In ancient armies, archers were the coun­terpart of the modern infantrymen. Wars of conquest were decided in battles in which the corps of archers played the decisive role. The deadly effect of this weapon is evidenced as late as 1415 when Henry V of England with an army con­sisting of about 1,000 men-at-arms and 6,000 archers defeated a greatly superior force of French Knights and men-at-arms. The French lost 5,000 of their nobility killed on the field of battle. The English losses were 13 men-at-arms and about 100 foot soldiers. In the hands of an experienced archer, the bow proved a deadly and decisive weapon until the advent of firearms.

The modern bow is a superior weapon when compared to its ancient counterpart. Knowledge of the strength of materials and modern manufacturing methods and techniques have pro­duced a bow which is outstanding in performance in the hands of an experienced bowman. In the field the archers’ code of conduct is predicated on the necessity to safeguard himself and his fellow archers from avoidable and regrettable accidents. Safety and courtesy can be considered synonymous terms in archery. To practice one is to assure the other. Wisconsin has not had a bow-hunting accident during any open season from 1934 to and including 1953. Pennsylvania enacted the neces­sary legislation to permit the bow to be used in hunting in 1929. One self inflicted injury was reported in the 1954 spe­cial season. The injury was incurred when a bow hunter stumbled and drove a broadhead into the calf of his leg.

Archery is a competitive sport in which group participation, even in the hunting field, is the rule rather than the exception and certain basic rules of conduct are general in their applica­tion. The sole aim is to prevent accidental injury to participants in the sport or to spectators. The match rifleman would im­mediately recognize the similarity between the conduct on the shooting line at a competitive rifle match and at an archery tournament or field shoot. The rules which apply to safe gun handling on the shooting line or in the hunting field are generally applicable to the man armed with a bow. In order to mitigate the chance of accidents among recent converts to the bow, the cardinal rules for safe bow handling and conduct on the range and in the hunting field are herein set forth. Use them as a guide to protect yourself and your fellow bowmen from injury.

Self Inflicted Injuries and How to Avoid Them

5.Put an arrow rest on the bow if it does not come equipped with one. Stiff feathers which comprise the fletching can cut the index ringer of the bow hand at the second joint as they ride across the hand. The arrow rest will also reduce the chances of having the indexed finger pierced by a splinter from an arrow shaft which breaks as it bends around the bow at the beginning of its flight.

6.The forefinger of the bow hand should be curled lightly around the bow to avoid striking it with the arrow.

7.In bracing the bow, keep the fingers on top of the bow string to avoid pinching them between the string and the bow limb.

8.Make certain the string is properly nocked before you release the manual pressure. Should the loop slip out of the bow nock as pressure is removed from the limb, the limb can snap back and may strike the archer in the face.

9.After the bow is braced, flex it gradually to the required arrow length and no farther. Bringing a bow to full draw im­ mediately after it is braced may cause it to break. Overdrawing will injure the bow fibres and it may rupture mmediately or the final break may not come until some subsequent draw.

10.Inspect your bow frequently for bruises and checks or cracks. If you find the fibres of the materials of which the bow is made damaged, or a separation of materials in the case of a laminated bow, retire the bow immediately, as it is a potential danger to the user.

11.Check the fistmele frequently while you are shooting. It is indicative of the condition of either the bow or the bow string. One or the other is letting down if the fistmele distance increases; in other words the bow or string has weakened. If your arrows suddenly begin to fall low on the target, check your bow string and bow immediately for signs of failure. If the fault lies with the string, renew it before it breaks, as sudden release of tension when a string breaks places abnormal strain on the bow and may cause it to break.

12.If your bow comes supplied with a keeper which is a string attached to the top of the bow and through the loop of the bow string, remove it. When a bow with a keeper breaks, the keeper generally forces the top limb to fly back and strike the archer on the head or face.13.Renew a bow string the moment it shows the slightest sign of wear. Frequently when a string breaks the bow will also break.

14.As an additional safety precaution it is prudent to wear head gear that offers some protection in case the bowman is struck by a broken bow limb. A stiff visored cap is a wise safety-precaution. Do not buy one with the visor so long that it will interfere with the bow string when the bow is brought to full draw.

15.Arrows should be selected with regard to the weight of the bow and the drawing length of the individual bowman.

16.An arrow with insufficient spine for the drawing weight of the bow may buckle and break as it travels around the side of the bow at the beginning of its flight. The broken shaft may puncture the bow hand of the archer and cause a pain ful injury. A like injury may be sustained if the arrow is overdrawn just prior to the instant of release. The pyle may be forced against the belly of the bow causing the shaft to break.

17.Examine wooden shafted arrows frequently and discard (break in two) those that show any evidence of cracks, checks, bruises, or splintering. These indicate points of weakness and an arrow undergoes its greatest stress as it bends around the bow at the start of its flight.

18.Do not shoot arrows when portions of the feathers that form the fletching become separated from the shaft. A loose feather can be driven into the bow hand like a splinter.

19.If an arrow slips from the arrow rest during the draw, or from the shooting hand if no arrow rest has been built into the bow, do not try to replace the arrow while at full draw. You may unintentionally release the arrow and drive it into your bow hand. Take the bow down and repeat the draw from the beginning.

20.A safe gun handler never lets the muzzle of his weapon point toward an individual and an arrow nocked in the bow must be handled in the same manner. The string may slip from the drawing fingers at the beginning of the draw.

21.Establish a common shooting line and have supervised practice and shooting at all times.

24.Never nock an arrow until the signal is given to shoot. A nocked arrow, like a loaded gun, is dangerous.

25.There is no safe place in front of the shooting line. Stay behind the line until the last arrow has been shot and the signal given to go to the target to retrieve arrows.

26.Avoid shooting when people are passing behind the targets, even at a distance. An arrow may strike the ground, ricochet and travel a considerable distance before it comes to rest, or it may be deflected from its line of flight so as to en­ danger persons, although they may be at one side or another of the line of flight to the target and apparently consider them­ selves in a safe position. On the target range, many an ex­perienced archer has moved forward from the fifty to the forty yard mark and by error adjusted the sight on his bow for sixty yards. No one is more surprised than the archer him­ self when he sees his arrow fly high over the top of the target.

27.If you shoot on an indoor range, the entrance should be back of the shooting line and other doors at the sides of the range or back of the targets should be barred against entrance from the outside. If panic locks are not installed and fire regula­tions prohibit locking the doors, notice should be posted ateach of these entrances that the archery range is in use and to enter is dangerous.

28.Do not permit interested spectators to wander over the field course while a shoot is in progress. If spectators are per­mitted, they should be accompanied by a guide to insure their safety. 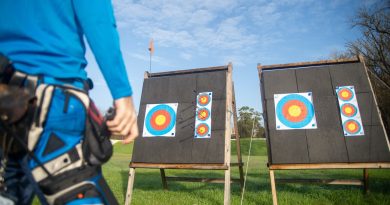 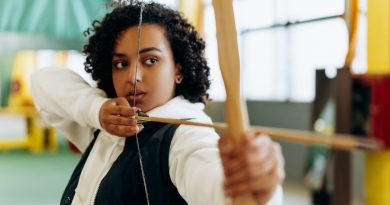 How To Find Cheap Archery Equipment 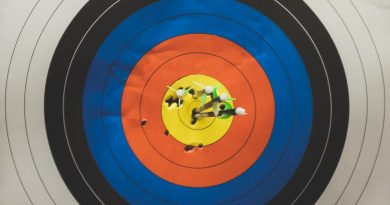 Scoring and Classification of Archers