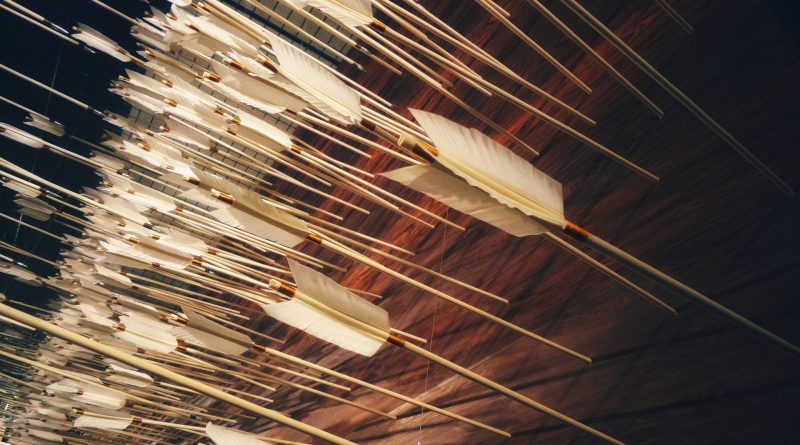 Skilled archers make it seem simple; however, shooting an arrow from a bow requires technique. It may appear easy, but it’s not. Many people, especially archers, fail to recognize the numerous components that affect how an arrow flies, including how far it goes as well as its path. This section supplies basic information about archery flight or the distance an arrow will soar. Content contained in this document also founded our interactive arrow shooting game. Enjoy as you learn simple physics and improve your shot.

First, we began with the bow. A simple, powerful machine, some may call it a two-arm spring. The bend or curve of the bow stores the archer’s energy. When the archer discharges the arrow, energy transfers to the arrow as a form of kinetic energy or force resulting from a motion.

Undeniably, the bow serves as one of the most significant factors that determine how far an arrow flies. To ensure that we keep difficulty and frustration to a minimum, we used the simplest bow and arrow in our simulation game.
This article also addresses factors such as the 1) angle from which the arrow is fired; 2) starting velocity or the speed that the arrow flies; 3) arrow’s weight; 4) arrow’s length; 5) length of the feathers on the arrow; and 6) height of the arrow’s feathers.
How can velocity be determined? Velocity is measured by the force and efficiency of the bow and the arrow’s mass. Just to keep it simple, we have already calculated the velocity in our simulation. Keep in mind that higher initial velocity increases the likelihood of an arrow traveling faster and farther.

The initial angle is another key factor. Generally, many people think that a higher initial angle increases the arrow’s speed. That couldn’t be further from the truth. Yes, it’s a fact that an arrow pointed in the air will fly farther, but when pointed too far, the arrow will travel a much shorter distance.

Once an arrow points high, it travels up and comes down; it loses momentum or energy as it drifts back towards the ground. Due to that loss in energy the arrow cannot go forward. Plainly stated, an arrow aimed too high comes down quickly at an extremely short distance. For additional clarity, think of a mountain with a pointy peak. If an arrow was shot at the same angle that the mountain sloped, the arrow would stop at the peak, landing on the other side of the mountain. Imagine, on the other hand, an extremely long U-shaped hill. An arrow fired at an angle similar to the mountain’s slope would travel a much greater distance, because the ends of the “U” are more spread out.

Next, another factor for consideration is the weight of the arrow. Dealing with weight in physics can get sort of complicated. Many archers usually want an arrow with a light shaft or beam and a heavy tip. Regrettably, as with all simulations, some realistic features cannot be replicated. Our game does not currently incorporate the weight factor. Weight has been generally represented in the game. We have defined a specific point between heavy and light arrows which represents the arrow’s ideal weight. Remember, if an arrow is too light it may not maintain the course when it flies, and you will have a hard time making an accurate shot. In contrast, an arrow that is very heavy is likely to cause the arrow to drag and fall sooner than a lighter arrow. Again, the weight affects the accuracy of the shot. You have to find the perfect balance. An ideal arrow’s weight should be midway between light and heavy. The archer’s preference determines the desired weight of the arrow.

Feather height defines one of the game’s final components, but that is definitely not the case in real life. Similar to the feather’s length, taller feathers make arrows drag and fly shorter distances. 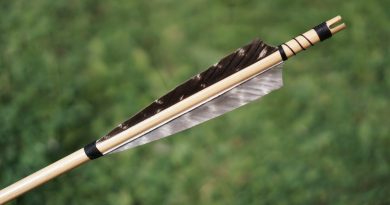 Flight mechanics of an arrow