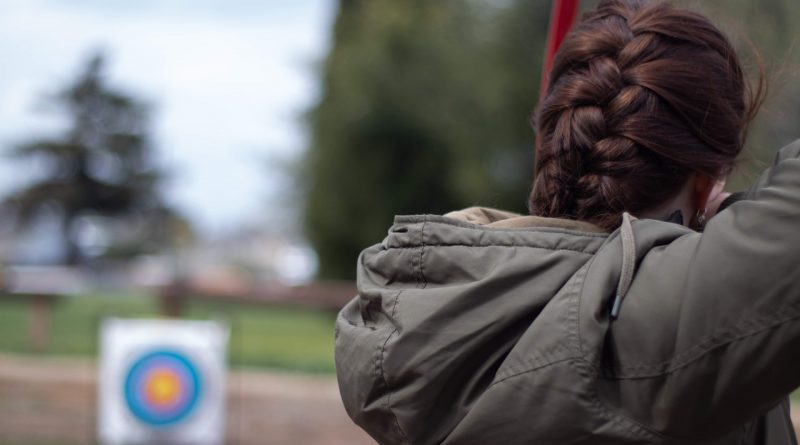 Second only to the bow in importance is the bow string. The diameter is limited to the width of the arrow nock and a good bow string must maintain a constant length under repeated stress and in changing weather conditions. The string is subjected to unusually hard wear at the arrow nocking point and at the bow nocks. Since good strings are expensive, replacing worn strings can become a major item of expense. Bowmen quickly learn that it is economical to make their own bow strings.

Of the tried and available materials, linen or flax sinew, hemp, and fortisan, a synthetic yarn of rayon, are used generally in the manufacture of bow strings.

Hemp is the cheapest and least desirable of the materials and is generally found on the lower priced line of bows. Linen and fortisan each have their advocates among the shooting fraternity. Both make up into excellent bow strings. The prevailing weight of opinion favors fortisan, from which its users claim lighter and stronger strings can be made. Fortisan was employed during the last war as parachute shroud material.

The knack of laying a bow string in the professional manner is not easily acquired. An explanation of the technique can be very confusing and leave the novice completely frustrated. A far better way to the goal is to watch a demonstration by one who already has the acquired ability, and then attempt your first bow string under your instructor’s supervision. This is particularly applicable if you are going to use fortisan for the material, as the diameter of the individual strands is so small that it can be measured only by a micrometer. The weight of the bow is the determining factor in selecting the number of strands which are to be incorporated into the completed string. The manufacturer’s recommendation of the number of strands required for bows of different drawing weights is shown in the accompanying table:

Walter Perry in his book Bucks and Boivs, devotes a chapter to describing the construction of a bow string. The necessary jig and various steps in one method of “laying” a string are well illustrated.

The author learned to shoot a bow before fortisan was available for bow strings. When it first appeared I adopted the “wait and see” view point or “let George do it” since the material was fairly expensive. It still is. A good fortisan bow string sells for $1.50. A second and compelling reason for sticking to linen as the material from which I made the bow strings used in my family was that I never had learned to lay a string in the professional manner used by the manufacturer or by my archer friends who have acquired the trick and have the necessary tools and jigs. Several seasons have passed and from personal observation I have concluded that the linen bow string built by a simple method taught me by an archer of my acquaintance is comparable to the hand laid fortisan bow string. Since three strings have been enough to last me an entire season I see no good reason for changing either the material or the simple method I use to build them.

The single loop string is rapidly losing in favor to the double loop. The one advantage of the single loop string is that it can be used on bows of different lengths. However, this is outweighed by the difficulty encountered in stringing the bow to the correct fistmele. Several trials may have to be made before the correct fistmele is achieved and the hitch must be loosened to lengthen or shorten the bow string for each attempt.Assuming that you have purchased a bow recently, it may or may not have included an extra bow string in the purchase price. You should always have a spare in your kit, and practice the habit of checking the string at intervals during a shoot. If your arrows suddenly begin to fall low on the target, check the height of the fistmele; it may be decreasing: If it is, check the bow string closely and discard it at once if it is showing signs of elongation due to -worn and broken fibres. If the bow string appears sound or you are uncertain of its condition, change bow strings; and if the trouble still persists and the fistmele increases, examine your bow carefully for signs of checks or cracks. The bow may be letting down, and to continue to shoot it will result in a broken bow with possibilities of personal injuries. Even a sound bow may break as the tension is suddenly released when a string breaks.

The first step in making a double loop string for your bow is to make certain that the finished product will be of the required length. Select a place where three finishing nails may be driven in the woodwork at waist level and permitted to remain,

Drive nail number 1, allowing it to project about one inch from the woodwork. Place one loop of your bow string over the nail and stretch the string to its full length. Drive the second nail in position so that the second loop may be slipped over the nail head and the bow string will be under slight tension. Drive the third nail one foot beyond the second nail in a prolongation of the line formed by the bow string. The three nails will now be at points on the same straight line. They are in the correct position and are all the jig that is actually required to build a bow string.

I use “Barbours” number 7 pure flax sinew manufactured especially for use in lock stitch machines by The Linen Thread Company, Inc., of New York for bow string material. A four ounce spool should sell for approximately $1.00 and from it you will be able to make bow strings for several seasons. Your local shoe repairman probably carries this material in stock or can secure it for you. In addition you will need a lump of beeswax about the size of an English walnut shell and a spool of number eight cotton thread. The latter item can generally be found in the wife’s sewing basket. I use four strands of linen for a 30 pound bow and five strands for a 40 pound bow.

Tie the end of the linen cord to the number 1 nail, Figure 39, and take a turn around the number 3 nail and then back and around number 1. Continue until you have the desired number of strands stretched lightly between numbers 1 and 3 nails. Take your penknife and sever the linen thread at the points where it passes around nails numbers 1 and 3. For a 40 pound bow you will now have five strands of equal length.

Measure seven inches in from one end of the strands and mark with a soft pencil. You will need both hands for the next operation. Use a vise, or a similar device, to clamp the bundle of strands together so that the ends project for a length of seven inches from the jaw. Wax these projecting strands thoroughly. The next step is to make a “pig tail plat.” Any feminine member of the family can teach you how to make one in a couple of minutes. Briefly the procedure is this: divide the individual strands into three groups. In this case two of the groups will be composed of two strands and the remaining strand will be the third group, a

The length of the plat that you will need is determined by measuring the distance around the loop of the string which came with your bow. Caution: each bow string has a large and a small loop. Construct yours accordingly. One loop is of sufficient diameter to permit it to slide down the upper bow limb when the bow is unbraced. A snug fitting lower loop stays in position while the bow is being braced or strung. Remove the work from the vise and bring the ends of the plat together. This will be the size of the completed loop. Slip the tip of the bow limb through the loop and check the loop for size. Remove the loop from the bow limb and clamp the loop in the vise, leaving about y8 inch of the ends of the plat projecting from the jaws of the vise.The next step is to tie in the loop. Separate the main strands into three groups similar in composition to the original three groups with which you started. Now combine a cord of two strands of the first group with a cord of a single strand of the second group, the cord of one strand of the first group with a cord of two strands of the second group, and the cord containing the remaining two strands of the first group with a like cord of the second group. The resultant will be a group of three cords composed of three, three, and four strands respectively. You are now ready to plat your tie in. Make this tie in plat about one and a quarter inches in length. Pull to straighten and wax the completed tie in. Cut off the projecting ends of the cords and your first loop is completed. For additional strength you may wrap this tie in with a length of the number eight cotton thread in a manner described later in this chapter.

Place this loop over nail number one in

Build the second loop just as you did the first. Do not be alarmed if the strands appear to get tangled as you plat the tie in of the second loop. The only precaution you should observe is to see that the apparent tangle remains a loose one. When you have completed the second loop, let the strands fall into position and string the bow with your new string. If you have had ordinary luck on your first attempt to build a string, the fistmele will not be quite high enough. Now unbrace the bow and remove the lower loop from the limb. Turn this loop several times between the thumb and forefinger so that a twist is formed in the main strands. Replace the loop and brace the bow. The result of this act is to shorten the bow string. Repeat the operation, if necessary, until the fistmele measures the proper height after an arrow has been nocked and the bow brought to full draw several times. It should be apparent that any error made in determining the proper length to build the string must be made so that the completed string is longer than necessary. The method described will permit shortening a double looped string but there is no method by which it can be lengthened if it is built too short.

Draw off several feet of the number eight cotton thread from the spool. Wax this length of thread thoroughly and then rewind it on the spool. Turn the bow to a horizontal position with the bow string toward you. Fix the bow firmly in this position, or if you wish, put cloth pads on the jaws of your vise, and clamp the handle in the vise with the string uppermost. Begin the serving at the point marked on the bow string nearest to the upper nock of the bow and work toward the lower bow nock. 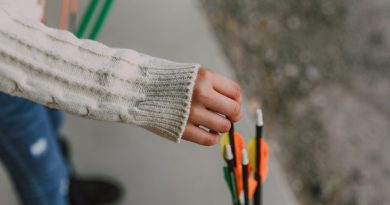 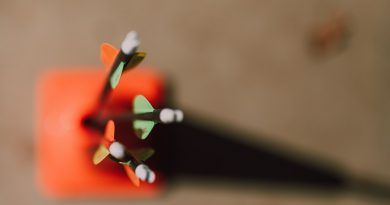 Before You Buy Check out Mathews Archery Equipment 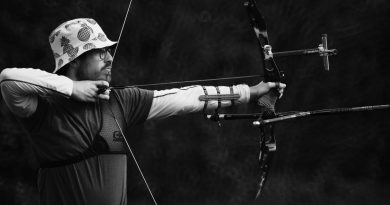