Whenever archers get together there are always those among them who would have us believe because our ancestors shot a bow five thousand or fifty thousand years ago that we moderns can shoot a bow instinctively and all that we have to do to hit a mark or bag our buck is to take a deep breath, look at the target, draw the arrow back to the ear, and let fly.

Well, if you buy that line, you will not be any better a marksman than your remote ancestors. Legends about Robin Hood’s merry men to the contrary, your ancestors were inferior marksmen by modern standards. With primitive equipment, they developed the art of stalking game to a high degree in order to close to point-blank-range to register a hit.

In the thousands of years since man first stood on his feet and walked, the period in which he has used missile weapons is of relatively short duration. No one can fix the exact “time” of man’s arrival on earth and even as late as the year 1860, the majority of scientists believed man’s existence covered a span of less than 6,000 years.

Since that date, evidence of man’s antiquity yielded through the discovery of ancient graves, fossilized remains found in geological formations laid down in the past, and excavations carried out in the exploration of caves in France and elsewhere in Western Europe, permitted archaeologists to establish that man was certainly in existence at the beginning of the Pleistocene period. Unfortunately no sure means of estimating the duration of these periods in terms of years is as yet known to geologists. Estimates vary from two hundred and fifty thousand years to one million and five hundred thousand years as the length of the period. The most reliable evidence now at our disposal indicates that man made his first appearance in Europe late in this period between forty thousand and twenty-five thousand years ago and near the end of the Fourth Glacial Age.

From ten thousand to twelve thousand years ago, Neolithic man migrated to Western Europe. The Neolithic men of Europe were white men ancestral to the modern Europeans. This stage in culture is characterized in part by the abundance of stone arrow heads. And so we conclude that at this relatively recent stage in our human history our ancestors learned to use the bow. The origin of the bow, however, is lost in the uncertainties of fixing exact dates for the different cultures of mankind. Excellent drawings of archers are found in the Palaeolithic carvings at Castellon, Spain and elsewhere. These carvings date back according to anthropologists from fifteen thousand to thirty-five thousand years.

If there is one thing that differentiates man from all other forms of life on this planet it is that he is a reasoning creature and not one that is primarily motivated by instinct. In other words, man is not the creature of habit that some persons would have us believe. Man does profit by his errors and learns from experience; man experiments, modifies, and improves (for his own ends) all things with which he comes in contact. The change is so slow, however, that for long periods at a time it is almost imperceptible.

Contrary to popular belief and the advertising claims, the reflexed, laminated bow is not a modern product. In Asia, during the early periods of recorded history, great military nations used a composite, reflexed bow of horn, wood, and sinew, that had a drawing weight up to one hundred pounds. The ancient Greeks, Assyrians, Turks, and Chinese, were adepts in the use of this type of bow. The metal bow, however, is a product of the twentieth century, while one of the latest developments in the bowyer’s art is the fibre-glass bow.

Even a casual reader or a student of history must conclude that individual aimed fire of missile weapons is a relatively modern development. The tactics employed by the military nations of the, past in the use of missile weapons such as the bow and in still more recent times, firearms, are indicative of the little importance attached to accurate individual marksmanship in the relatively recent past.

We, in the United States, have been strongly influenced by the six foot English long-bow which for hundreds of years was the sole missile weapon of Great Britain’s foot-soldiers. England’s supremacy as a military nation was predicated on the skill of the foot-soldier armed with the long-bow. By law, every male from sixteen to sixty years of age was required to own and practice with the long-bow. Price regulation is not a modern innovation. Since England’s safety depended on her archers, the price of a good bow was fixed by law so that no man could plead that he could not afford one.

During the Wars of the Roses and in the Hundred Years’ War, the archers were the elite troops of Great Britain. They were the decisive factor in many a hard fought battle. At Crecy, France, in the year 1346, the English long-bow proved its worth for the first time in Continental warfare.

The English, under Edward III, lay on the forward slope of a hill with their right flank resting on the River Maye at Crecy and their left on the village of Wadicourt. Two divisions, or battles as they were designated at that time, consisting of a center of dismounted knights and men-at-arms plus two wings of archers formed the first line. A third division was in reserve. The total force was thirty-nine hundred men-at-arms, eleven thousand English archers and five thousand Welsh light troops.

The French, under King Phillip of Valois, were in much greater strength, numbering at least thirteen thousand men-at-arms, six thousand Genoese cross-bowmen and over twenty thousand foot soldiers. The English chose the battle field and were drawn up waiting for the attack. The French host, marching in column, came unsuspectingly upon the English position when they arrived at the village of Estrees. Phillip could not control his unruly feudal lords who, instead of deploying and forming for action as an army, attacked piecemeal with their contingent of troops.

From the beginning of the battle, there could be but one result. The French army was practically annihilated. It was customary in those days to record only the chivalry who fell in battle. At Crecy the French loss was one thousand five hundred and forty-two men, while the English lost but fifty. For the first time the cavalry arm had met its equal: The choice of ground the massed fire-power of the English archers, and the stability afforded by the steady ranks of spearmen made a tactical combination that proved the margin of victory.

As firearms improved, they gradually replaced the use of the bow in English warfare. The forces of Elizabeth were the last in which the bow played an important role. Of all the long-bows that were made and used in England, only four examples have survived to the present day. Two of these were recovered from the wreck of a ship which sank in the Thames during the reign of Henry VIII.

The tactical use military men made of the bow was predicated not on the skill or marksmanship of the individual archer but on the premise that serious casualties could be inflicted on an enemy by massing the fire of hundreds and thousands of archers and actually filling the air, in the words of old writers, with a cloud of arrows.

Additional evidence that aimed individual fire was not practiced as late as the eleventh century is contained in an account of the Battle of Hastings, fought in the year 1066. William, Duke of Normandy, was unable to penetrate the Saxon wall of shields with his men-at-arms. Every charge of his knights was repulsed. Near the end of the day he ordered his archers to shoot high in the air and drop their arrows behind the Saxon wall of shields. Harold, the Saxon King, struck in the eye by an arrow, was mortally wounded, and the Conqueror’s men-at-arms charged through the line to victory.

When the musket replaced the bow, the same tactics were employed. No attempt was made toward individual aimed fire. Bodies of troops fired volleys by command. The lines formed two deep in close order facing the enemy. When the first line fired a volley, it dropped to one knee to reload and to permit the second line to fire their volley. Muskets were smooth bored weapons, without sights, and thoroughly inaccurate by any modern standard.
Infantry tactics, employing the massed fire of troops in close order was still favored by the military throughout our Colonial period. Accounts of Braddock’s defeat at the hands of the French and Indians tell of the British regulars standing in close formation and firing volleys into the surrounding forest at an invisible foe. Not until the latter half of the 18th Century is the practice of individual aimed fire evident in accounts of military campaigns. The Pennsylvania rifle used by the Colonial frontiersmen proved to be one of the first deadly weapons in the hands of an experienced marksman. For the first time individual aimed fire of an improved missile weapon proved its superiority. Nevertheless the old idea of massed fire by volleys died hard and was still used to some extent in the War between the States. The Colonials and Frontiersmen who comprised the militia of the Continental Line proved the fallacy of this line of reasoning at Bunker Hill during the Revolution, and at New Orleans when the British troops under General Pakenham were annihilated by the aimed fire of General Jackson’s Militia. Old habits are slow to be cast aside.

To those who advance the proposition that man has inherited through his remote ancestors an instinctive ability to shoot a bow, I must conclude after careful consideration of all the evidence that man acquires ability through repeated effort and not through instinct. Witness the child’s effort to walk. Man discarded the bow as soon as he was able to develop and learn to use a more effective weapon.

Sights are a relatively new addition to missile weapons and their value has been proven and is no longer debatable. In all of the attempts to obtain accuracy, the practice of aimed individual fire has paralleled the improvement in missile weapons. Modern archery tackle is an improvement over anything available in the past. I would set down as a basic rule that there is no substitute for practice. The technique and equipment you use is a matter of choice. To acquire the ability to do the same thing in the same manner each time you release an arrow will come only through practice. And practice, not instinct, will get you hits on the target, and in the final analysis, pay off in the hunting field. 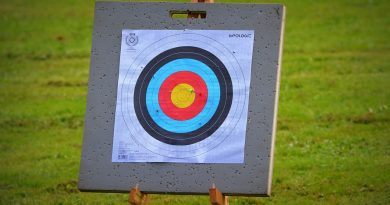 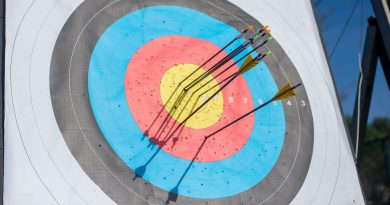 The Bow Sight – Advantages and Limitations 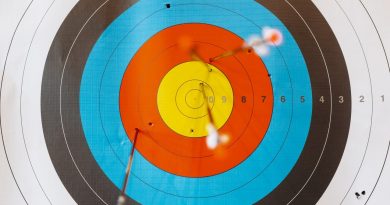