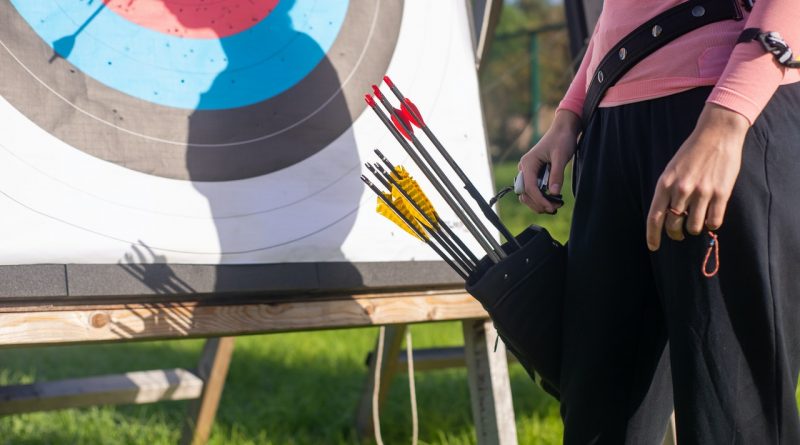 At one time or another most of us have had a bow. In the majority of cases we acquired it in one of two ways: either as a present from our parents or we made one the hard way out of any convenient branch of a tree and a piece of string. Equipped with a bow and arrows of a sort, we were on our way. How to shoot was strictly for us to find out. If, instead of a bow, we had been presented with a .22 single shot rifle, you may be sure we were given instructions by our parent on the proper safety precautions that have to be taken in handling a gun. We would have been accompanied a field by one of our elders where we would have been permitted to shoot the weapon under the sharp eyes of our instructor.

Since the bow at short range is just as formidable a weapon as a gun, it is perhaps just as well that the ability to shoot a bow has to be acquired. In addition to every thing that is required of a rifleman, the archer must also build up the muscular force to propel the arrow.

Nevertheless, no one can say we did not make an effort to hit a mark with our bow. We tried every way we could imagine but the arrows never responded to our wishes, and like youngsters the world over, we soon tired of our lack of success, laid the bow away and forgot it.

What then was the reason we did not continue to enjoy archery along with our other activities? Two fundamental errors were committed; in each case our parent was at fault. When a parent buys a youngster his first gun, the gun is selected by the parent on the basis of personal knowledge of firearms or after consultation with a friend who has such knowledge. But when it comes to buying a bow, parents seem to believe all bows are alike and you go to the store, pay your money and take it home.

When you give Johnny the bow you probably say: “There you are son. Let’s see you hit something with that.” You need not worry. The chances are 10 to one that the bow is not suited to Johnny’s physical limitations or that he will be fortunate enough to acquire any skill in its use without aid or instruction. After all, if you buy a baseball for your youngster you take time to teach him to play catch.

That archery has managed to survive such a handicap is a tribute to the sport. Sooner or later some of us stop to watch a group of archers. Remembering our own unsuccessful efforts, we are rather surprised at the consistency with which some of the participants can send their arrows into the target. Curiosity as to how they are able to accomplish what we had given up years ago, compels us to move nearer so that we can observe their methods. Now archers are a friendly group and observing an apparent interest on our part, one of the archers waiting this turn to shoot introduces himself and asks if we shoot. We admit that we have not drawn a bow since we were kids, and before we are really aware of what has happened, the archer has us on the shooting line with his bow and is showing us the elementary technique which every archer must acquire before be can consistently hit a target.
Fifteen minutes and about 1oo questions later, on our part, we are told that we have had enough for a start. “You have been using muscles that you have not used in years. Come out and try it again. Glad to help you get started.” And started we are. Secretly we are just a little pleased that some of the arrows we shot went into the target. Now the years have taught us, among other things, to seek advice on any subject with which we are not familiar. So it follows naturally that we ask our archer friend what kind of a bow we should get to enjoy this new, to us, sport.

Let us listen-in on the Old Archers’ conversation, as he offers from his fund of knowledge advice on equipment suitable for a beginner.

“There are almost as many different kinds of bows, or varieties of bows as there are archers on the shooting line. Every archer, once he has acquired a proper shooting form selects a bow of a weight and type, which be believes is best suited to his physical makeup and the use to which he expects to put it.”

Walking along the shooting line, the Old Archer spoke to one of his friends and then picked up a bow from its ground quiver.

“Here,” said the Old Archer, “is a bow which meets very well the qualifications required in a beginners’ bow. It is a flat type lemonwood bow with a built up handle. While yew and osage orange are the two best bow woods, lemonwood, which is less expensive will give excellent results at target distances up to sixty yards, with a drawing weight well within the beginners’ strength.”

“You understand,” said the Old Archer, “the muscles used to bring a bow to full draw are strengthened by use, and a bow is always shot from full draw. Your first bow should be selected so that you can bring it to full draw without undue strain. One of the greatest handicaps to a beginner is a bow that requires an all out effort on the part of the archer to bring it to shooting position. First things must come first and a light drawing weight is a prerequisite in a beginners’ bow, so that he can concentrate on learning proper shooting form.”

The Old Archer paused, and then said: “Don’t discount a light weight bow. I know a National Target Champion at distances up to 60 yards who shoots a bow which has a drawing weight less than thirty pounds. The bow is a stock model, flat type, lemonwood bow backed with fortisan. It can be purchased at retail for about seventeen dollars.”

By this time it was perfectly evident to me, that there were plenty of points on which I needed information before I could expect to achieve any measure of success with a bow or suffer anything but frustration if I attempted to use one in the hunting field.

“Perhaps,” I said to the Old Archer, “I had better forget the whole idea and stick to the rifle. It sounds too complicated and might be too expensive.”
“Now wait a minute,” he replied. “See that chap in the white tee shirt shooting on the next target. Watch him a little while.”

I did, and he seemed to be hitting the target quite regularly, although his arrows were rather scattered over the face of the target.

“That chap has been out here just four times. He wants to hunt deer with the bow this fall instead of his rifle, with which, he tells me, he has already killed his share of deer. Two weeks ago he was at the same point you are now. We helped him select a suitable bow with which he could learn to shoot that was well within the price range that he was willing to pay. In fact, its drawing weight is 28 pounds and he paid nine dollars for it. He also bought a dozen good practice arrows. They are made of Port Orford cedar, have metal points and replaceable nocks and cost about six dollars; a ground quiver, shooting tab to protect his fingers, and an arm guard make up all the essential equipment that he needs at this stage. In fact, he made the arm guard and shooting tab out of pieces of scrap leather and constructed his ground quiver, which holds extra arrows, from a piece of stiff wire. You see, even at the start the novice may, if he chooses, begin to make various pieces of equipment.”

“Fine,” I said. “Now that I know the price range and drawing weight of suitable equipment for a beginner; how do I know what length of bow and arrows I require?”

“Fortunately there is a simple method based on the distance in inches measured from finger tip to finger tip of the outspread arms which will give the proper length of arrow for you. The length of the common flat wood bow is dependent upon the arrow length.”

Here is the table:

I thanked the Old Archer, who gave me the name of a local retail store which had an archer on the sales staff, where I could buy the proper type of archery equipment. “Next week I’ll come back ready to shoot.” A friendly group of people I decided as I walked home.

Now, the Old Archer of whom we have made use to describe equipment suitable for a beginner, may in fact, be anywhere from sixteen to sixty years of age. Archery is an acquired skill and is enjoyed by every age group. Youth alone is not a prerequisite for an expert. Some of the high scores are shot by men who have passed the half century mark, and it is not unusual to see several oldsters well up at the head of the line at any tournament.
Perhaps the reader aspires to use a bow in the hunting field. A hunting bow may draw from 45 to 80 pounds and would only serve as a handicap to the beginner in learning to shoot. Some states limit the minimum drawing weight of a bow which may be used in the hunting field. This minimum is as low as 30 pounds in Wisconsin, a state which has had a long record of bow and arrow deer seasons dating from 1934. In several states, including Oregon and Florida, the minimum weight permissible is 40 pounds. If you are a rifleman, in all probability you learned how to shoot with a single shot moderate priced .22. Your prized big game weapon was a later acquisition. A similar situation exists in bows. The heavy hunting bow is a special weapon and like the big game rifle has a. limited use.

If you do not number any archers among your acquaintances an inquiry addressed to your State Game Agency should bring you the name and address of your state archery organization and they in turn could advise you of clubs having range facilities for target or field shooting in your vicinity, or the name of an archer who will be glad to help you get your feet set firmly on the shooting line.

Remember, most target bows for men who are experienced archers do not exceed 45 pounds in drawing weight. The ladies rarely draw a bow weighing more than 30 pounds. A beginner is advised not to attempt to use these drawing weights in learning to shoot a bow. A rough guide for determining a bow of suitable weight to use on your first attempt at archery is: Youngsters up to 10 years old, not to exceed 15 pounds; 10 to 16 years of age, 20 to 25 pounds; over 16 years of age, 25 to 30 pounds. 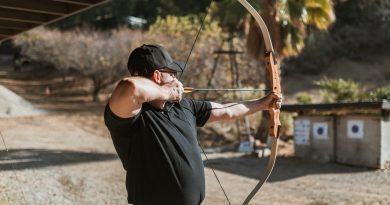 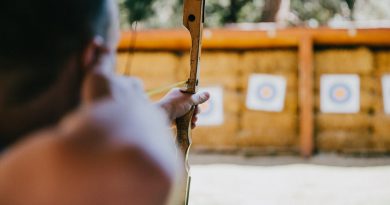 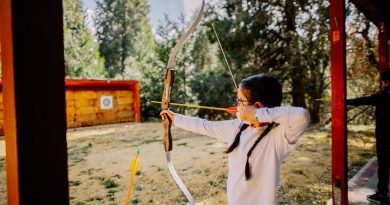